A Tribute to Canon Michael Flannery by Archbishop Micheal Neary below. 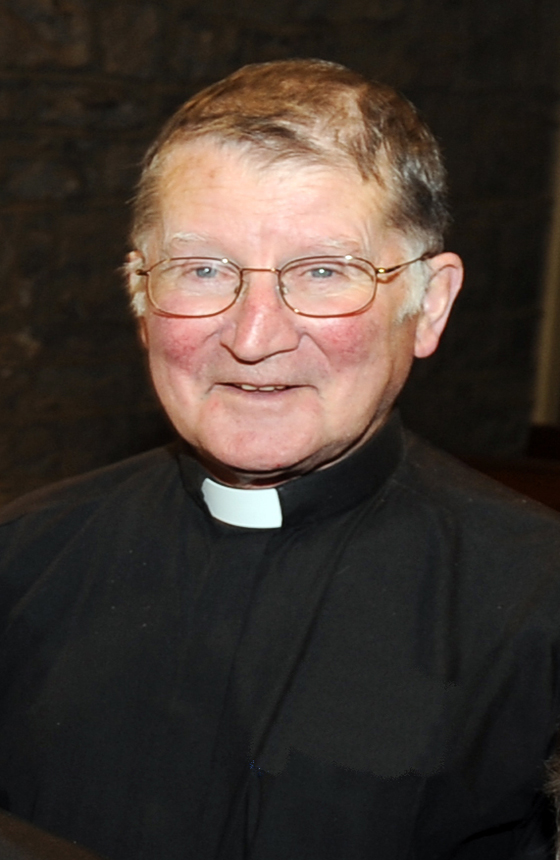 The world into which Fr. Michéal Flannery was ordained in 1960 was very different from the one in which he ministered prior to his retirement two and a half year ago.   I first got to know him when I was a student in St. Jarlath’s and he was Dean of Studies, entrusted with keeping 300 young students quiet in one big study hall for about 3 hours a day.  When one considers the community building in which Fr. Michéal came involved later in his priesthood he must have experienced the task of Dean of Studies as very confining.

In 1961 he moved to Tiernea, áit ar chuir sé snas ar a chuid Gaeilge. Thit sé i ngrá le nósanna agus traidiúin agus cultúir na Gaeltachta.  He a great interest in sean-fhocla, local dialects and old Irish prayers and did much to preserve and publish them in the various parishes he served.

From Tiernea he moved to the Eastern boundaries of the Archdiocese to Cloonfad.  This was to be his only pastoral assignment outside the Gaeltacht. Nuair a bhí sé i gCluain Fada, chaith sé bliain amháin ar iasacht go Deoise na Gaillimhe, sa Ghaeltacht, i gCamus ó 1978-1979

In 1981 he moved to Cornamona, Joyce country, ceantar Dhúiche Sheoighe, a place that he loved dearly.  During this time he became very aware of grants which contributed significantly to the development of the local area.  Fr. Michéal worked with politicians and public representatives to improve the quality of life in the area.

Being a man who understood the importance of community – there were few more aware, more expert or more astute when it came to the workings of the various grants and schemes for different community projects than was Fr. Michéal.  When visiting him shortly before he died I teased him about this, suggesting if he hadn’t been a priest he would have been an excellent politician.  He just smiled a knowing smile, and nodded with a rather mischievous eye.  Every organization which had any relationship with the parish and which was for the betterment of the people received his full support.

It was most fitting that the year Canon Michael retired that his huge work in the area of community building was recognized by NUI in presenting him with an honorary Masters in Rural Community Development.

Contribution and interest in Tuam Archdiocese

In 2007 he was appointed a Canon of the Archdiocese, an honour which he wore very lightly.  He had a wonderful interest in history and especially in the folklore and history of the Archdiocese.  At the gatherings of priests, whether at Confirmation dinners or elsewhere he loved to discuss these matters. He was blessed with a wonderful memory and was a great source of information regarding the priests and people of the diocese going back the years.

Michael was very pleasant company and in his own mischievous manner he liked to set up an argument by throwing in a grenade of one kind or another in order to set the tone.  I have very happy memories of occasions like this and I enjoyed meeting him with priests after Confirmation.

As a keen follower of Gaelic football he enjoyed playing the game and I gather gave good as he got on the field!  He had a huge interest in the fortunes of the parish teams in which he served and was a life-long supporter of Milltown, St. Jarlath’s College and of course the Galway football team in good times and bad.

Canon Michael was utterly committed to the ideal and value of priestly fraternity.  During his early years as a priest in the rural areas of the Archdiocese it was not easy for priests to meet and socialize.  With that on mind – many of the priests met regularly, had a meal, shared news and stories and often played cards together.  Michael absolutely loved those gatherings.   Nothing gave him more delight than taking the few bob off fellow priests in such card games at which he excelled.  Clericalism is often spoken of in negative terms these days – but the clericalism that Michael espoused was imbued with a genuine brotherly fraternity and love of things priestly.

Living with the Cross of ill health

While he carried the cross of ill-health for many years, it did not in any way diminish his availability for, involvement in or support for the people he served so generously.  Thirteen years ago when on holiday in the United States he suffered a serious heart attack but such was his determination that he continued working with and for the people he served. There was an irrepressible and what seemed to be an indestructible dimension to his priesthood.  It is hardly a coincidence that the feast of Our Lady of Lourdes, World day of the Sick was about to end when Canon Michael returned to meet his creator.

Milltown – Through and Through

He was always very proud of his Milltown roots and his family.  He acknowledged that it was the people of his parish who inspired him in so many ways.  Indeed the Flannery family have contributed so much priesthood and Religious Life in our diocese and elsewhere through, Canon John D., Fr. Seamus and the late Sr. Joy, go ndeana Dia trócaire ar a hanam.

I know that Fr. Michéal would want me to express his deep appreciation of all that he has received from his family, from his devoted housekeeper, Peggy, and the people of Milltown and the people he has served in the parishes in which he ministered, particularly the people of Knock-Spiddal.

Fr. Micheál was utterly steeped in the traditions and lore of many previous generations of Tuam Clergy.  He will be sadly missed by the fraternity of the Tuam Presbyterate, many former parishioners, his wide circle of friends, not to mention his devoted and loving family.  To use his own phrase in talking about a dedicated priest – Sagart ar fad a bhí ann.  Michael was just that – a loyal and devoted servant of Jesus Christ.  May he reap the reward to that at the banquet table of the Lord in heaven as we speak.  They had better watch out because after the banquet – he will be all set to take a few bob from them once the stories get going and the game of cards start!  Go raibh leaba aige i measc na naoimh agus go ndéana Dia trócaire ar a anam uasal gaelach.