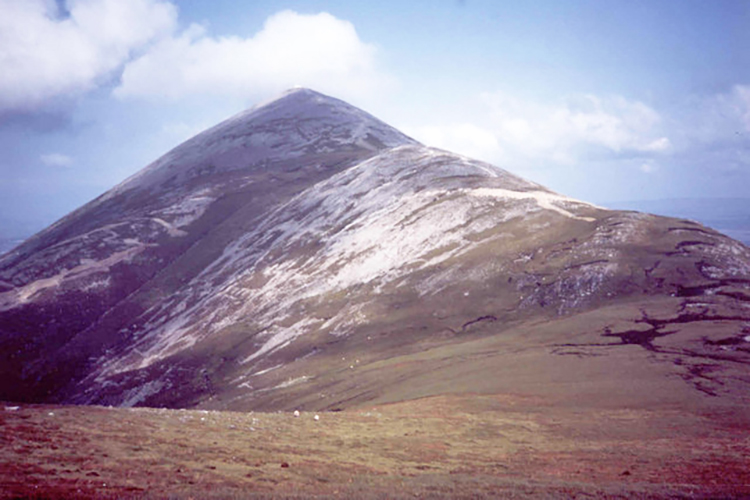 Croagh Patrick (Irish: Cruach Phádraig, meaning “(Saint) Patrick’s Stack”), nicknamed the Reek, is a 764 metres (2,507 ft) mountain and an important site of pilgrimage in County Mayo, Ireland. It is 8 kilometres from Westport, above the villages of Murrisk and Lecanvey. It is the third highest mountain in County Mayo after Mweelrea and Nephin. It is climbed by pilgrims on Reek Sunday every year, which is the last Sunday in July. It forms the southern part of a U-shaped valley created by a glacier flowing into Clew Bay in the last Ice Age. Croagh Patrick is part of a longer east-west ridge; the westernmost peak is called Ben Gorm.

On the last Sunday in July, thousands of pilgrims climb Croagh Patrick in honour of Saint Patrick who, according to tradition, fasted and prayed on the summit for forty days in the year 441. Masses are held at the summit, where there is a small chapel. Some climb the mountain barefoot, as an act of penance, and carry out ’rounding rituals’, in which they pray while walking sunwise around features on the mountain.

There had been a chapel on the summit since the 5th century, called “Teampall Phádraig”. An archaeological excavation in 1994 found the remains of a foundation at the summit. A small chapel was built on the summit and dedicated on 20 July 1905. During the pilgrimage on 31 July 2005, a plaque commemorating its centenary was unveiled by Michael Neary, the Archbishop of Tuam. Mass is celebrated in the church on Reek Sunday and on 15 August. It is opened by information guides.