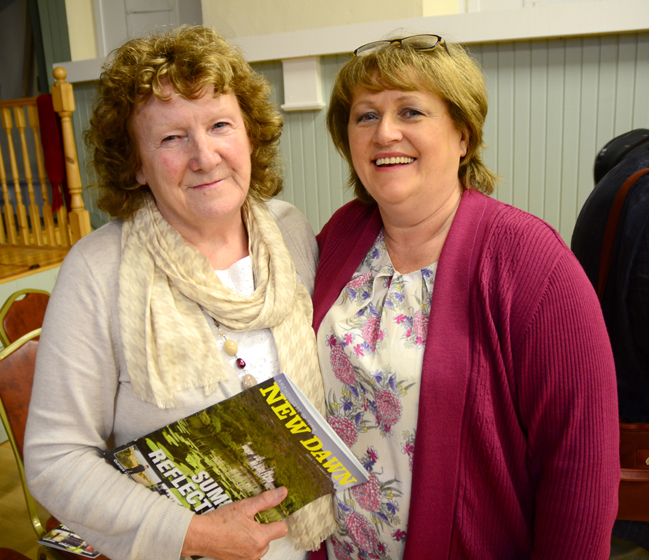 The 11th edition of New Dawn is now available in all parishes.  It was launched on Tuesday, May 26th in Clifden Town Hall by the founder of the Clifden Arts Festival, Mr. Brendan Flynn.  A gallery of pictures are below.

The eleventh edition of New Dawn is another bright and breezy edition of photographs, news,
features and articles.

Ordinary and extraordinary lives and events are captured inside the
attractive cover of the current issue on which is featured ‘Summer
Reflections at Kylemore.’

Kylemore Abbey is in the news, as the Benedictine community is involved in
negotiations with the Catholic University of Notre Dame (South Bend,
Indiana, USA) with a view to establishing a third level education facility
at the famous abbey.

Young people feature strongly in the issue and there is a report on the
lighting of the Flame of Positivity at Wembley Arena in March, the largest
English Catholic Youth event of 2015.

The milestone event of Archbishop Neary’s twenty years in charge of the
diocese is covered and a warm tribute paid to him as Gaeilge.

Kilkerrin Apostolic Work Society have celebrated their golden jubilee and
their story is recorded. There is also an article on what it really means to
be a giver of care.

The fleeting West of Ireland light animates an artist living in Partry, and
Gary Sice writes of how students benefited from the inspirational qualities
of Fr Oliver Hughes at St Jarlath’s College.

“On those fields he not only moulded many fantastic football teams, he also
built character, perseverance and courage in each individual,” writes the
Galway football star.

Another uplifting story is that of 92-years-old Fr Charles (Hubie) Newell a
native of Curracuggeen, Headford, who at the age of 65 co-founded the
Discalced Carmelite Mission in Nigeria.

Clifden is the parish featured in this issue. You will also read of the
woman behind the annual diocesan pilgrimage to Lourdes, about Easter Sunday
morning in Achill, and the new dawn at Knock.

That, and many, many more interesting topics from all around the diocese in
this 48-page issue which goes on sale at churches next week and is full
value for €4