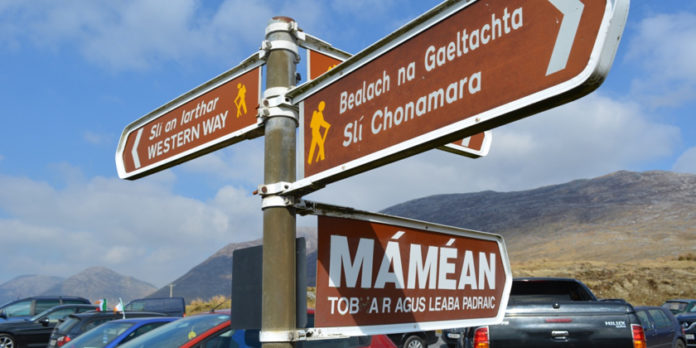 Bhí ceiliúradh álainn againn ar lá Fhéile Pádraig ar Mháméan i mbliana.
On St. Patrick’s day, March 17th, 2016 Mass was celebrated at St. Patrick’s Shrine, Máméan in the Maamturk Mountains in glorious sunshine. Fr. Micheál MacGréil was chief celebrant and was assisted by Fr. Fintan Monahan and Fr. Paddy Considine. The theme of Mass was prayer and commemoration of what was achieved in the 1916 rising. In his homily, Fr. Micheál said the celebration of St. Patrick along with being a celebration of language, culture and Irishness was primarily and most importantly a celebration of faith and this is sometimes forgotten in the midst of the many other good things being celebrated. He lamented the “airbrushing of faith” in the public square in recent times. He quoted a conversation he had once with Seán McBride (the son of Major John McBride and Maude Gonne) who was commenting then on the situation in Iran. According to the Major at the time it was observed in Iran that radical and militant liberalism led to radical and fanatical religion. In his estimation it is in the interest of a tolerant and progressive society for both to have respect for each other and both had an important place to play. The newly elected politicians were prayed for and for their important deliberations in electing a new government. Liosta na Mairbh was read out and all recently deceased of the area were fondly remembered. Beidh turas na Croise ar Mháméan ar Aoine an Chéasta ag 3.00 i.n. Fáilte roimh chuile dhuine.