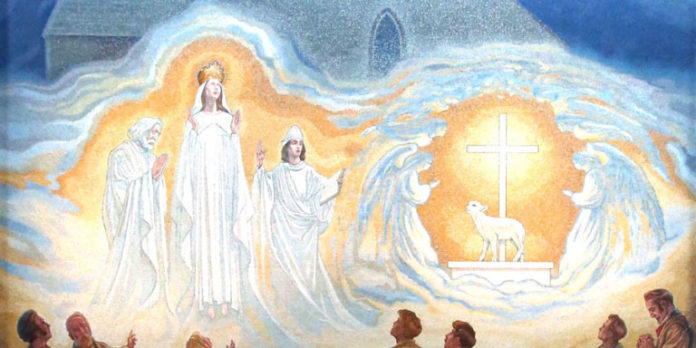 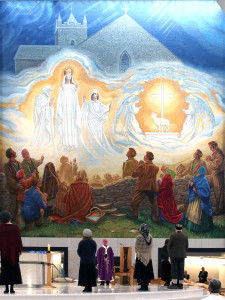 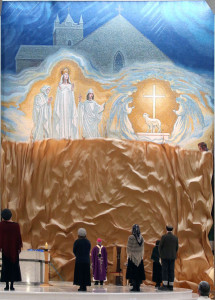 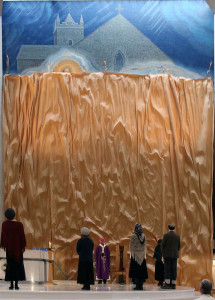 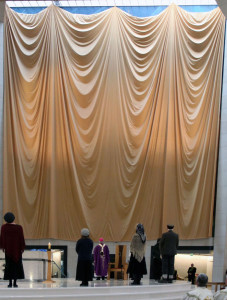 Joining with Fr. Richard Gibbons and Fr. Patrick Burke and the concelebrating priests, I extend a very warm welcome to you all as we come to unveil this beautiful and awe-inspiring mosaic of the Apparition. In so many ways we might situate ourselves in the minds of the 15 people who gazed in wonder at the Apparition on the 21st August 1879. Today our eyes are lifted towards this magnificent mosaic as we are drawn into what it depicts – Jesus the Lamb of Sacrifice, the cross by which He redeemed us, the altar of the Eucharist where he makes himself present, his mother whom he has given to us on Calvary, St. Joseph and St. John the Evangelist and the choirs of angels. I am told that there are 1.8 million pieces in this mosaic. It is difficult to find a language which would capture the beauty and magnificence of what we behold and yet isn’t it just a shadow of the reality which those 15 people looked upon on that August evening at the gable end a few yards away.

The First reading is very appropriate – it captures a caring and compassionate God who came to the rescue of a suffering people in Egyptian slavery to bring them into the Promised Land. As you are aware at the time of the Apparition, Ireland, and particularly the West of Ireland, had been through the devastation of the famine. People were demoralised; death and destruction was all around and perhaps a general sense of hopelessness. And yet the people recognised the importance of the Eucharist, Mass, faith and something which was very much in keeping with Irish spirituality, a deep devotion to Our Lady. While there were no words spoken at the Apparition yet the words of today’s first reading gives voice to the meaning of the silent Apparition. The Apparition was God’s way of recognising the suffering of our people, identifying with them and promising to be supportive of them.

Today’s gospel depicts that image of a caring and merciful God who goes against the instincts to focus on quick results and productivity. This parable is very appropriate during this season of Lent and particularly as next weekend we focus in a special way on the mercy of God during this Jubilee Year of Mercy. The parable of the Fig Tree invites us to consider the gift of another year of life as an act of God’s mercy. John the Baptist long declared that the axe lay at the root, poised to strike. Any tree that did not bear fruit would be cut down. In this parable, however, the gardener pleads for and is granted one more year. The year that Jesus proclaimed, moreover, “the year of the Lord’s favour”, would be a year of forgiveness, restoration and second chances.

What would you do if you had only a year left to live, only a short time in which to get things in order and establish true priorities? How important that year might be! The lesson of the Fig Tree is a challenge to live each day as a gift from God. Live each day in such a way that you would have no fear of giving an account of how you have used God’s gifts. I believe that this is a very appropriate Gospel when you consider that of the thousands of pilgrims coming to Knock, so many avail of God’s mercy and healing in the sacrament of reconciliation. In this context it is very appropriate to acknowledge the great work being done by priests in their ministry in the confessional. Here God’s love empowers our growth. We are reminded of the kind of God we have, a God whose name tells us of His presence in our midst, a presence that makes reform a joyful process.

We thank God for this marvellous day as we unveil this magnificent mosaic which conveys in such breath-taking beauty the mystery of the Apparition. This mosaic would not have been possible without the exceptional goodwill and extraordinary generosity of the benefactor, Mr. Joe O’ Toole of Tuam who is so supportive of Our Lady’s Shrine and indeed of the Church in general. We thank God for the benefactor of this heavenly mosaic and ask the Lord to bless him, his family and all those dear to him.

All pilgrims as so appreciative of the way in which this basilica has been beautified and absolutely transformed in the past eighteen months. So many people at home and abroad have generously contributed and made it possible.

The Parish Priest, Fr. Richard Gibbons, has planned and executed all of this in its various stages. We are deeply indebted to him for the way in which he has taken such care of the project. In all of this he had the powerful support of Fr. Patrick Burke and the various committees at Knock Shrine led by David McConn.

The various ministries which are exercised here in Knock form a mosaic of witness to hope – youth, evangelisation, care of the sick and invalids by the stewards and handmaids, the healing ministry exercised by priests in the Sacrament of Reconciliation and the Sacrament of Anointing. All of this contributes to enabling us to appreciate a God who is with us and his mother who cares for us.

May this beautifully restored Basilica continue to be a beacon of light and hope for all pilgrims for years to come. May pilgrims who look upon this mosaic with the eyes of faith be drawn ever closer to a welcoming and merciful Lord and a loving Mother.