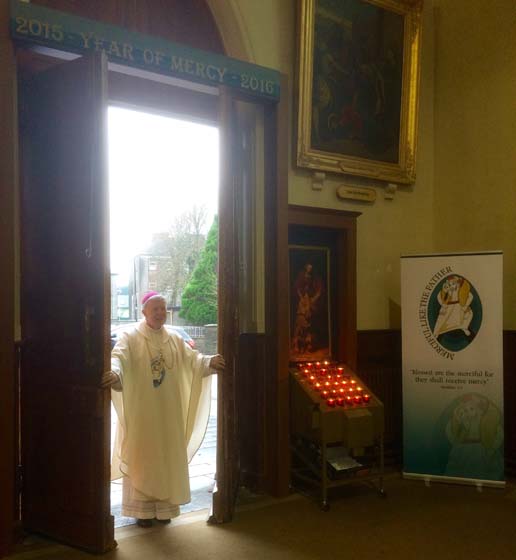 HOMILY FOR OPENING OF THE HOLY DOOR – KNOCK SHRINE.

When Pope Francis announced the Jubilee Year of Mercy earlier in the year he stated “I have often thought how the Church may render more clearly her mission to be a witness of mercy; and we have to make this journey. It is a journey which begins with spiritual conversion”. At the centre of this Jubilee Year will be the mercy of God which is a challenge to all of us as we remember Christ’s words, “Be merciful, even as your Father is merciful” (Luke 6:36).

Mercy in our world today is often seen as a sign of weakness, whereas God’s mercy is an indication of his omnipotence. In one of the readings of the Mass we read “Oh God, who reveal your power above all in your mercy and forgiveness”,….“Patient and merciful” are words which describe God in the history of his dealings with his people. One Psalm reminds us that “God heals the broken hearted, and binds up their wounds”. The Lord lifts up the downtrodden, he casts the wicked to the ground” (Psalm 147:3,6). So the mercy of God is not something abstract but a concrete reality revealing his love of that of a Father or Mother for their child. We read in another Psalm “mercy endures forever”. This was a Psalm prayed by Jesus with his disciples immediately preceding the passion.

The compassion of Jesus finds expression in so many ways right through his ministry, healing the sick, feeding the hungry, welcoming the tax collector and the sinner. In the various parables you are familiar with the way in which Jesus points us in the direction of God as a Father who forgives the wrong, overcomes rejection with compassion and mercy. The Parable of the Prodigal Son in Luke, Chapter 15, comes to mind, illustrating that God is full of joy and pardons.

Traditionally but inaccurately, the story known as “The Prodigal Son”, is one which has shaped Christian identity. Without this Parable and perhaps also without that of the Good Samaritan – Christianity would be something different. The three parables (The Lost Sheep, The Lost Coin, The Lost Son and Brother) share a common theme – loss, findings and celebration. Jesus tells this parable against the Pharisees and the Scribes who complain that Jesus welcomes sinners and eats with them. The point of the story is not so much “sin/forgiveness” but rather “human beings lost/human beings found”. A more accurate title for the story would be “The Lost Son and Brother”. There are three personalities here, the Father, the Younger Brother, the Older Brother. You will notice when the younger son comes to himself and decides to return home after squandering his money, he makes the distinction in his speech to his father between “son” and “hired servant” – “I am not worthy to be called your son; treat me like one of your hired servants”.
The fact that the Father catches a glimpse of his son while he is still “a long way off” gives the impression that the father spends days forever on the watch for his son’s return. Filled with compassion (the same Greek Word as was used to describe the reaction of the Good Samaritan on seeing the wounded traveller), the Father runs out and welcomes his son. The speech which the son has prepared is cut off by the Father before the part about becoming one of the hired servants. In other words that possibility never arises. Orders are quickly given: bring out the best robe, put a ring on his finger, sandals on his feet. All these symbolise complete reinstatement as son and there is a call for celebration. You will notice that the topic “sin” and “repentance” has no place in the father’s vocabulary. Although the Son has been thinking along those lines “Father I have sinned against heaven and against you”. The Father thinks only in terms “dead” and “alive”, “lost” and “found”.

As the celebration gets underway the camera focuses on the older brother who, when he is made aware of the calls for the celebration, he is immediately overcome with anger and resentment and refuses to go in and join the party. The Father leaves the house to meet his son and plead with him. The elder son pours out his resentment – for years he has slaved for his father, in other words he thinks of himself as a servant rather than a son. He is in a “contract” relationship with his father. He disowns his brother, referring to him simply as “this son of yours”. The father reassures him that he is his son, not a servant: “son you are with me always”. For the father however the person is more important than what the younger son has or has not done.

The story ends there and we never learn whether the man was persuaded and went in to join the music or remained outside. While the older brother does not come across as an attractive character, his reaction is perhaps reasonable and understandable. The father has acted extravagantly. The story invites us to experience the older brother’s anger and perhaps recognise in ourselves several aspects of the “contract” mentality, the resentment that others are getting favoured treatment instead of what they seem to deserve. The question with which we are left is “where do I stand”. Do I join in the celebration or do I remain outside? The story suggests that those who criticise Jesus place themselves in the last situation. He is celebrating the return of the lost to God’s family. The question is can we cope with a God imaged by the father in this parable? Can we be part of a family whose hospitality is so extravagant, so uncalculatingly indulgent of human failing as this.

Pope Francis reminds us that the very credibility of the Church is seen in the way in which she shows merciful and compassionate love. This has not always been the experience however. In our culture today the practice of mercy is receding and is very often replaced by an attitude of violence, vindictiveness or revenge. Pope Francis underlines the fact that it is absolutely essential for the Church and for the creditability of her message that she would testify to Mercy. The challenge of the Jubilee Year is seen in the Lords own words: “Be merciful as your Father is merciful”. (Luke 6:36).

During this Holy Year we are encouraged to participate in pilgrimages. A pilgrimage is a place where change can take place. It is a time which encourages conversion. The Holy Door reminds us that we will find the strength to access God’s mercy and dedicate ourselves to be merciful with others as a result. Here in Knock the Sacrament of Reconciliation has a special emphasis. Pilgrims come here in order to access Christ’s mercy in this Sacrament of Confession. This is very much in keeping with the message of Knock and the Apparition of the Lamb of Sacrifice on the Altar against the background of the cross. In the Gospel of St. John, John the Baptist points to Jesus as “the Lamb of God, who takes away the sin of the world”. We are reminded of this as we prepare to receive Jesus Christ in the Eucharist when the priest holds up the sacred host quoting those words. I believe that Knock will have a very special part to play in this Year of Mercy. I pray that all pilgrims to Our Lady’s Shrine and all the parishioners here at Knock will avail of the opportunity to experience the mercy of Jesus Christ in this Sacrament and will go out from the Sacrament to be ministers of mercy to their brothers and sisters.