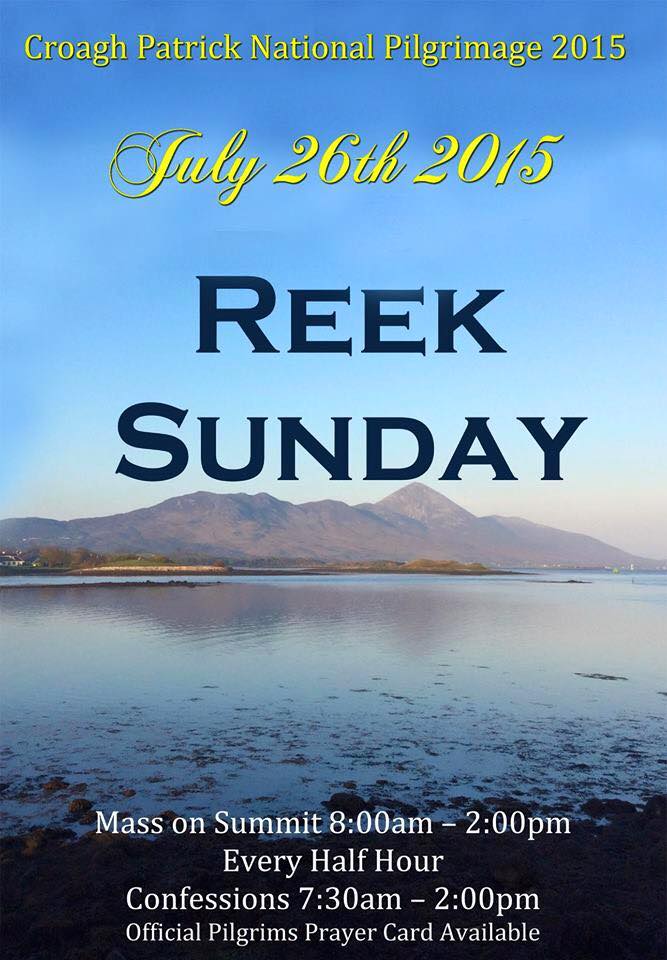 Reek Sunday or the Annual National Pilgrimage to Croagh Patrick takes place this Sunday. Details on the poster below: 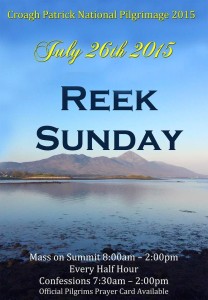 Homily of Archbishop Michael Neary for the Croagh Patrick Pilgrimage 2015

I welcome you all as we retrace the footsteps of our Patron Saint, Saint Patrick, to give expression to the faith which he brought to our shores and as we struggle to see the implications of that faith in the world in which we live. To a people confused by various doctrines and practice, Patrick brought enlightenment in the form of our Christian faith. A man of social concern he recognised the way in which faith in Jesus Christ addressed the issues of his day – idolatry, oppression and slavery. Today we are challenged to address these issues which present themselves in a much more subtle and sophisticated way.

Faith and religious values are central to the identity of many individuals and to the family as the crucible of personal relationships, enabling us to discover who we are. In our culture, these may have been eroded but they are not eclipsed. We may be tempted to consign faith and religion to private life and attempt to edit God out of the market place. Confidence in human progress is hugely impressive but it can be exaggerated, resulting in religion being regarded as part of disposable society. We think that by confining God, society will remain unchanged. Understandably this has led to individualism and the consumerist culture where rights are emphasised at the expense of responsibilities. We are reminded of the story of the Tower of Babel when, giving expression to their creative powers, people attempted to build a universe in which God would be excluded.

In a consumerist culture artificially generated needs are met by over produced and over-advertised goods. Religious faith ought to be a protest against rather than an acceptance of this situation and ensure that we do not substitute the politically correct for genuine values, the distinction between right and wrong. Surely, the acid test of any society or indeed of any faith is the care it takes of the disadvantaged, as it hears the silent cry of the afflicted, the lonely, the marginalised, the poor and the powerless and responds to them. No one has a right to impose his or her religious convictions on society, but if we fail to acknowledge the insights which faith contributes to the principles for which we stand and the values we share then society will be the real loser.

Do we undervalue faith today? There is much that religious faith can contribute to the collective conversation of where we have come from, where we are now and where we are heading. In unchartered territory society needs a compass, as Pope Francis emphasised in his excellent Encyclical Letter Laudato si (Praised be to you my Lord), which he published on 18 June last. Down through history faith has acted as such. It speaks to something which endures in the human character. In our contemporary culture, change, even change for the better, may be experienced as threatening, traumatic and confusing. Financial markets, currency movements, technological changes are all complex and unpredictable. In Laudato si, Pope Francis, has challenged us to reflect on what happens in human relationships, broken dreams and the disintegration of our world and environment when we fail to make room for God in our moral and technological deliberations. I encourage everyone to read it.

Faith, however, is a persisting feature for the human situation and will continue to be so as long as we are prepared to ask the most fundamental questions of why we are here and what kind of world we seek to create. The more diverse society becomes, the more we need to reflect on what holds us together. We need to learn how to adapt the principles of our faith to the very different circumstances if we are to be people of hope. We are faced with the challenge of respecting cultural and religious diversity while at the same time promoting the common good. It is in families and communities that we first learn to become responsible. Faith, family and community are closely interrelated. The neglect of one has serious implications for the other.

The impression which frequently emerges in our society is one of irreconcilable and unbridgeable difference between faith and life. The focus is frequently on conflict and confrontation which underestimates vast areas of consensus and collaboration. Extreme voices get attention, whereas consensus is frequently dismissed. Civil society however requires a willingness to listen respectively to those who have a different worldview, nevertheless when the faith perspective is offered it is frequently dismissed as ‘judgemental’. But in truth the Christian faith is built on a foundation of love, which seeks to include everyone, especially those in the margins.

In history we have witnessed successive attempts to find alternative to God as an object of worship. People are tempted to turn to forms of idolatry, whether the market, or the consumer society. Personal freedom is maximised at the cost of the common good. Religious faith provides us with the courage to make judgements and commend some ways of life while drawing attention to shortcomings of others. People need to be supported in their efforts to maintain a way of life which may not be supported by the opinion polls today. This is not an argument for nostalgia, for focusing on the past in a way that is lifeless and un-inviting. Rather we need to summon up the courage to acknowledge how faith and religion might contribute to rebuilding a consensus and in that way propose the difference in how people live their lives.

Here, as we follow in the footsteps of Saint Patrick, we are reminded of the courage of the apostle of Ireland when in his Confession he stated, “I cannot be silent – nor indeed is it expedient to do so – about the great benefits and the great grace which the Lord has deigned to bestow upon me in the land of my captivity”. With Christ before him, behind him and beside him, he proclaimed God’s message with power and conviction. Patrick teaches us how to view the details of our lives, or our culture and of our surroundings as part of the work of God. He is confronted by trials, betrayal and hardship. Yet his writings reflect a tremendous sense of inner peace and confidence in the help of God. Like Saint Paul, Saint Patrick had the courage to stand up to this ridicule, persecution and even death for the faith. A man of perseverance and infinite patience, Patrick confronted discouragement with the hope of the gospel. And if there is one thing we all need in Ireland today surely it is hope, and that hope comes directly from Jesus Christ.

As followers of Jesus Christ we are called to light a candle of hope for people who live in a dark world. Like Saint Patrick we too are challenged to march to a different drummer and answer a Gospel call that is profoundly counter-cultural, because the primary ideological voices of our time are the voices of autonomy, to do one’s own thing, self-fulfilment. Patrick calls us to self-transcend and therefore to a fulfilment beyond this world’s dreams. Amen.

· Archbishop Michael Neary is Archbishop of Tuam. Tomorrow on Reek Sunday on the summit of Croagh Patrick:

– Archbishop Neary will celebrate Mass at 10.30am;

– the Sacrament of Reconciliation (Confession) will be available from 7.30am until 2.00pm; and,

· Croagh Patrick is a physically demanding pilgrimage. Pilgrims who intend to make the climb are asked to follow the instructions of stewards. While it is a custom for some to make the climb barefoot, pilgrims should come prepared for changeable weather conditions, and are advised to bring suitable warm/waterproof clothing, good footwear, walking stick/staff and water, and to be mindful of the safety of themselves and others. Croagh Patrick (2,510ft/765m), Ireland’s holy mountain, dominates the landscape of southwest Mayo both spiritually and physically. The Croagh Patrick pilgrimage is associated with Saint Patrick who, in 441, spent forty days and nights fasting on the summit, following the example of Christ and Moses. The name ‘Reek Sunday’ comes from Patrick’s ability to Christianise many pagan customs including the festival of Lughnasa, which previously had heralded the start of the harvest festival honouring the ancient pagan god Lugh, whose name is encompassed in the Irish word for August: Lughnasa. This festival’s tradition became absorbed into the new Christian beliefs and locally become known as Domhnach na Cruaiche (Reek Sunday). History was made on Reek Sunday 2008 when Archbishop Neary’s celebration of Mass was broadcast from the summit by RTÉ television and on the World Wide Web. On Reek Sunday 2005 Archbishop Neary unveiled a plaque to mark the centenary of Saint Patrick’s Oratory which is located on the summit of Croagh Patrick.

· Photographs of Croagh Patrick overlooking Clew Bay are available on a special feature on www.catholicbishops.ie. A virtual tour of the mountain, can be viewed on the website of the Archdiocese of Tuam www.tuamarchdiocese.org and on the website of Westport parish www.westportparish.ie also contains additional information about the holy mountain.