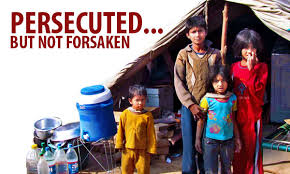 HOMILY PREACHED BY ARCHBISHOP MICHAEL NEARY AT THE PILGRIMAGE OF THE CATHOLIC NURSES GUILD OF IRELAND AND MASS FOR PERSECUTED CHRISTIANS – KNOCK, 2nd MAY 2015

I welcome you all on this special occasion. The Catholic Nurses Guild of Ireland are holding their pilgrimage today and I want to thank them for making provision for a pilgrimage to pray for persecuted Christians throughout the world.

Firstly the Catholic Nurses Guild of Ireland has as their aim to promote the professional, spiritual, cultural and social development of the nursing profession. It is appropriate that they would have their pilgrimage here because their Patron is Our Lady, Health of the Sick. All of us have experienced the hugely significant part which nurses play in our hospitals and nursing homes, in the local community. We know the way in which the nurse journeys with the patient and indeed with the family in a supportive, reassuring and encouraging manner. A good nurse, happy in her or his vocation brings serenity to difficult and demanding situations.

As nurses and midwives you have always worked ethically and professionally in doing your utmost to respect and protect the life of every person in your care. You are committed to and recognise the dignity of every person from conception to natural death. I am conscious of the deep concern and disappointment which you experienced and expressed at recent decisions with regard to the protection of life on the part of Government. In spite of all the debate you have maintained a consistency of approach as you endeavour to see all mothers and unborn babies protected, cherished and safeguarded from all harm. This is due in no small way to the professional commitment of your members over many years to the inherent dignity of every person in your care. There is a very definite link between the Catholic Nurses Guild of Ireland, their commitment to life and our pilgrimage today to pray for Christians whose lives are under threat.

The Persecution of Christians

Today we also gather to pray for and commemorate Christians who are persecuted throughout the world. There has been an appalling lack of protest about the ongoing and severe persecution being faced by Christian communities in the Middle East and North Africa.  Some Christian communities who have existed for almost two millennia are being driven from their lands through violence, intimidation and murder.  It is essential that we uphold our fellow Christians through prayer and that we seek to raise awareness of their plight in our national media.  The aim must be to prompt political action to bring this persecution to a halt.

Ireland has a long and proud history of peacekeeping and charitable work throughout the Middle East and Africa.  Our government can exercise a moral leadership in attempting to bring the EU’s focus to bear on this issue.  Individuals, too, have a role in addressing these issues.  Support through prayer, charitable donations and lobbying for action are all needed.  Greater yet though is to work on our own attitudes towards immigrants and refugees.  We must challenge our own stubborn hardness of heart in that regard.

Ancient Christian communities of Iraq and Syria are under very serious threat and may soon be entirely extinguished. A century ago Christians constituted 20% of the middle east; today that number stands at 4%. The western world could be accused of indifference to such brutal actions.

Former Chief Rabbi, Jonathan Sacks, has been highlighting the matter of the assault on Christians throughout the world and he declared “this is the crime of humanity of our time. It is the religious equivalent of ethnic cleansing. It is deliberate, it is brutal, and it is systematic.” And he goes on to say “I am appalled that the world is silent”. There are indications, however, that confronting the persecution of Christians is slowly making its way onto the world agenda.

In the west, people are in the habit of thinking of Christianity as a socially dominant institution which makes it difficult for them to grasp that Christians can actually become victims of persecution. Eighty per cent of all acts of religious discrimination in the world today are directed at Christians. Statistically speaking an average of 100,000 Christians have been killed each year for the past decade. That works out to 11 Christians killed somewhere in the world every hour, 7 days a week, 365 days a year, for reasons related to their faith.

Persecution against Christians is intensifying.  The world is witnessing the rise of an entire new generation of Christian martyrs. It represents not only the most dramatic Christian story of our times but arguably the premier human rights challenge of this era. Pope Francis remarked in a general audience “when I hear that so many Christians in the world are suffering, am I indifferent, or is it as if a member of my own family is suffering? The Pope asked his following – “am I open to that brother or sister in my family who is giving his or her life for Jesus Christ?”

In the last week, there was the brutal murder of at least thirty Ethiopian Christians in Libya.  A couple of months ago, twenty-one Coptic Christians were similarly beheaded.  The persecution of Christians has been ongoing for well over a decade. In 2003 there were over 1.5 million Christians in Iraq – in just over a decade this figure has fallen below 400,000.  Churches that date from 200 AD have been destroyed.  The city of Mosul, one of the oldest Christian cities in the world, once had a Christian population of 60,000.  Christians there were faced with the choice of forced conversion, death or to flee from their homes.  The population fell to 3,000 before the last of that community were driven out last year.  Since the start of the civil war in Syria, almost half of the Christian population has now fled. The series of revolutions in Egypt has seen Coptic Christians murdered and their Churches destroyed.

Four years ago the Catholic Patriarch of Jerusalem asked the question “Does anybody hear our cry? How many atrocities must we endure before somebody somewhere comes to our aid?” At the start of the 21st Century, the words of Christ prophesying the persecution of his followers ring as clearly as ever. Some 200 million Christians in at least 60 countries are denied fundamental human rights solely because of their faith.

Christians are languishing in jail for blasphemy in Pakistan and churches are burned and worshippers regularly slaughtered in Nigeria and Egypt which has recently seen its worst anti-Christian violence in 7 centuries. Most violent anti-Christian problems of the early 21st century saw as many as 500 Christians hacked to death by machete wielding Hindu radicals in Orissa, India, with thousands more injured and 50,000 made homeless.

A few voices have been raised in the west about all of this. The religious historian, Rupert Shortt, has written a book called Christiano Phobia. America’s most prominent religious journalist, John L. Allen Jnr. has published A Global War on Christians while former Chief Rabbi, Jonathon Sacks, has spoken about it in the House of Lords.

On Good Friday, tens of thousands of pilgrims joined Pope Francis for the Way of the Cross ceremony, recalling Jesus’ crucifixion. Among the cross bearers were Syrian and Iraqi refugees, and Nigerians who had escaped Boko Haram persecution. The service came a day after almost 150 people were killed in an attack on a Kenyan University. Pope Francis said “we still see today our persecuted brothers, decapitated and crucified for their faith in Jesus, before our eyes and often with complicit silence”. There is undoubtedly a disturbing indifference of world institutions in the face of all this killing of Christians.