ADDRESS FOR THE LAUNCH OF Earthing the Word: Selected Writings from the Furrow

In 1950 The Furrow periodical came to birth, a monthly journal for the contemporary Church. I understand that it was the brainchild of a Tuam priest in Maynooth, the late Canon J. G. McGarry. The late Tommy Waldron was a Tuam student in Maynooth at that time and was just about to commence his theological studies. Four years later, Tommy was ordained a priest for our Archdiocese and this year would be celebrating the diamond jubilee of his ordination. Our Archdiocese of Tuam has contributed so much to the success of The Furrow through Enda McDonagh, Tommy Waldron and Canon Padraic O’ Connor who is a member of the Furrow Trust. It is very appropriate that we launch Earthing the Word: selected writings from the Furrow by Tommy Waldron with an introduction by Enda McDonagh and that the launch would take place here in our Archdiocese. I welcome the Editor of The Furrow, Rev. Ronan Drury and also Mary Waldron, sister of Tommy and members of Tommy’s family, nieces and nephews, as well as, people religious and priests of the Archdiocese and members of the media.

Mgr. Tommy Waldron is somebody who has been captured by God’s written Word, in a way similar to the manner in which God’s spoken Word guided the Old Testament Prophets like Isaiah, Jeremiah and Ezekiel. God’s Word captured Matthew, Peter and Paul and in our own time the late Tommy Waldron. Tommy, because of his energy, wit and literary flare enabled Christ’s word to speak to all of us.

Although he spent so many years in formal education as teacher in Presentation College, Headford and St. Jarlath’s College and later as President of St. Jarlath’s, Tommy realised that real life meets us in the market place, in hospital beds, in broken homes and breaking hearts, where love and hate, sin and grace come face to face.

Tommy was conscious of and recognised the importance of scripture and theology in the search for God and the human person as we reflected on experience. He enables us to reflect on and articulate our struggle as we experienced bewilderment and confusion. He recognised the role of the homily giving expression to the faith of the people in a very personal manner. Tommy was a wonderful weaver of words. While others excelled in the sound-byte Tommy was unique in his ability to paint word pictures and boy did they come alive with the gentle but generous stroke of his brush. In him words became flesh. It was incarnation over and over again.

His creative power of imagination found expression in his ability to tell a story, unfold a narrative in which we recognise ourselves. Someone said that story is the basic narrative quality of human experience. In this he helped us to become aware of paradox and contradiction, our potential for good and our inclination to do otherwise. Starting with the reality Tommy was so successful in finding words to give shape to it. His use of imagination evoked something within ourselves. In his homily there was blend of religious imagination lending expression to ritual, symbol and story. He was conscious of the fact that the homily can deepen or deaden our faith in the magic and mystery of Jesus.

Cardinal John Henry Newman insisted that the teacher be earnest and be personable. In this Tommy used language with reverence, with care and with feeling. He played on words, enjoyed to pun, was particularly fond of assonance, alliteration and antitheses. Those who listened to him and read what he had to say were captured, amazed at his freshness of language, his poetic vision, unexpected twists and deeply personal witness to Jesus Christ. He recognised that language enabled us to speak to God and so treated it with such devotion and care. He used words to explain, expound, exhort and evoke, to set us dreaming as well as thinking. He takes us by surprise.

In his spoken word (and thankfully we have access to this in various tapes and CDs), there were measured syllables, rhetorical balance, attractive cadences and all with a view to gentle and yet forceful Christian persuasion.

Tommy knew what the issues are, the questions being asked which define the contemporary culture. He had that extraordinary ability to read, listen and participate in the world in which we live. Because he was impatient with abstraction and generalisation he was conscious where people are hurting, what are their hopes, their needs for joy. Either listening to or reading his homilies you were both educated and entertained, amused and amazed by the way in which he dialogued with the words of Jesus in the Gospel. With Tommy the words of Jesus became perennially new, ceaselessly fresh. Tommy was very conscious of the fact that while God’s word is inspired, the people who hear God’s Word are also an inspired people and the Holy Spirit is active in that interchange. This, I presume, underlines the way in which he approached his homilies.

The biblical stories as presented by Tommy are our stories, about ourselves, our own apostasies, our battles and blessings. Holiness is not something hazy and elusive. It is rather something that is expressed in our struggles, our falling and rising again. Tommy’s homilies ring with a note of intense pastoral care for those he addressed and they are filled with concrete and thoroughly recognisable situations, with characters. He used few abstract terms and preferred images to argument. He showed great sensitivity to struggling, aspiring and sometimes despairing human beings, with quite individual aches and aspirations, fears and worries. His arms were outstretched – one in faith to the Word of God, the other in compassion towards the need of real people today. As we listen to or read his homilies it is as if he is speaking from living experience in today’s world, has tested beliefs in the crucible of suffering, and is speaking of a living God and not a dead dogma. In Tommy’s stories he comforted the afflicted and frequently afflicted the comfortable. He had a total and unswerving commitment to the task of proclaiming the Word, a complete conviction as to its truth and power and at the same time a deep sense of being merely a human instrument of God’s word of grace.

This afternoon we remember him with deep affection, one of the most powerful communicators of God’s Word in our time one of our own – a Castlebar man and a priest of our Archdiocese. It’s my real pleasure and privilege to launch Earthing the Word: Selected Writings from the Furrow by Mgr. Tommy Waldron. 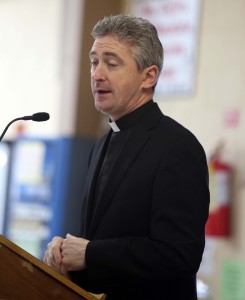 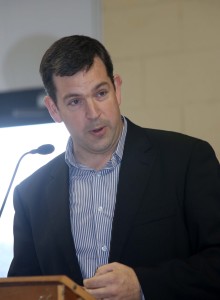 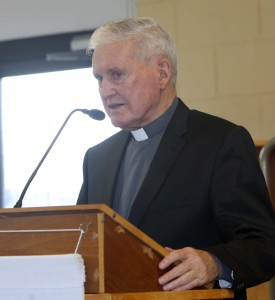 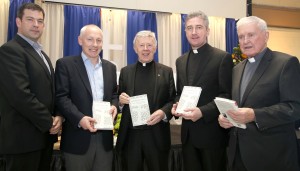