Tuam town and Tuam Archdiocese will be celebrating with great delight and happiness on Trinity Sunday, June 3rd at 3.00 pm in the Cathedral of the Assumption when Archbishop Michael Neary will ordain two young men to Priesthood for service in the Archdiocese.

Rev. Eugene O’Boyle is 29 years old.  A native of Claremorris, he entered the seminary in August 2006 after completing a degree manufacturing engineering in the University of Limerick.  His parents are Mary and Eugene O’Boyle.  The newly ordained Fr. Eugene will celebrate his first Mass on Monday evening June 4th in Claremorris Church.

Rev. Shane Sullivan is 27 years old.  A native of the United States, Shane studied for the priesthood for his home diocese of Duluth from 2004-2007 where he graduated in Arts and philosophy.  He transferred to Tuam Archdiocese in 2007 having Connemara links, his Dad being a native of Cill Chiaráin.  His parents are Kathleen and Bart Sullivan of Baxter, Minnesota.  The newly ordained Fr. Shane will celebrate his first Mass on Monday evening, June 4th in Cill Chiaráin Church as Gaeilge.

The last ordination for the Archdiocese was in 2006 when Fr. Patrick Burke, a native of Killererin was ordained.

Tuam Archdiocese covers a very large area with a mainly rural population.  The diocese is bilingual with a number of parishes in the Gaeltacht along with some island parishes.   There is a Catholic population of around 120,000 people in that area.  Tuam has 108 diocesan priests ordained for service in the region of whom about 80 are still in active service.  There are also 8 religious order priests working in the diocese.  Apart from Eugene and Shane there are three other clerical students studying for the priesthood all at different stages.

Best wishes to Shane and Eugene for many happy years of fruitful ministry in the Archdiocese of Tuam.

In the attached picture there is a photo of Rev. Eugene O’Boyle and Rev. Shane Sullivan, deacons along with Archbishop Michael Neary who will ordain them to the priesthood on Sunday, June 3rd. 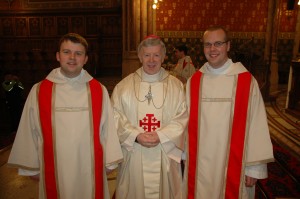