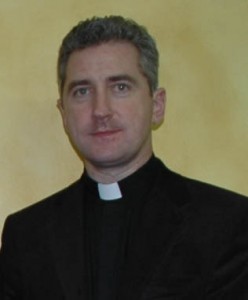 Archbishop Michael Neary, Tuam, has appointed Rev. Richard Gibbons Parish Priest of Knock in succession to the late Mgr. Joseph Quinn, RIP.  Fr. Gibbons was born in October 1969, a native of Louisburgh, Co. Mayo.  He was educated locally at primary and secondary level obtained degrees in Arts and Law in UCG before starting his studies for the priesthood.  He studied philosophy and theology in Rome and was ordained in 1999.  He did post-graduate studies in Rome from 1999-2000.  In 2000 he was appointed curate in Headford and chaplain to the presentation secondary school there.  While in Headford he obtained a H.Dip in Ed. from NUIG.  In 2003 he was appointed curate to Our Lady’s Shrine, Knock and has ministered in Knock until his appointment as Parish Priest. Congratulations and best wishes to Fr. Richard as he embarks on his new ministry as parish priest and spiritual leader of the National Shrine of Our Lady at Knock.