Archbishop Neary deeply regrets to announce the death of Canon Tommie Mannion, PP of Claremorris, Co. Mayo.  Sincere condolonces to the Canon Tommie’s family, to his nephew Fr. Michéal Mannion, who is parish priest of the Aran Islands, to Canon Tommie’s parish colleague, Fr. Peter Gannon and staff in Claremorris, to the priests of the Archdiocese, to the many parishioners he served througout his ministry, to his wide circle of friends and acquaintances. 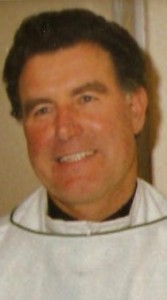 He was an outstanding sportsman, a brilliant hurler an excellent footballer and a great athlete.  In 1958 he won a Hogan Cup with St. Jarlath’s College, that year beating Gormanstown College in the final.

An Ghaeilge agus an Ghaeltacht

Most of all Canon Tommie will be known as a man of great gentleness, a deeply spiritual person, dedicated and faithful to his priestly duties in the many locations he served in the Archdiocese.

The following details include some of Canon Tommie’s biographical details and his pastoral appointments and ministry in the Archdiocese of Tuam.

Canon Tommie bore his long illness with dignity and courage.  Many thanks to all who helped him bear his cross and cope with the difficult time of sickness over the past few years.

He will be sadly missed by many.

His funeral Mass will be on Wednesday, the feast of the Triumph of the Cross at 1.00 pm.  Burial afterwards in the Church grounds.