World Youth Day 2011 took place from Aug 15-22. A group of about 30 young people from our diocese joined the expected 2 million pilgrims in Madrid. 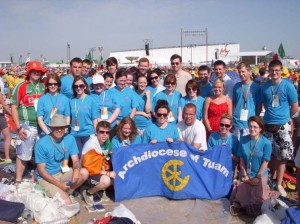 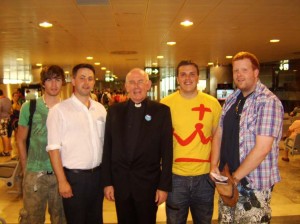 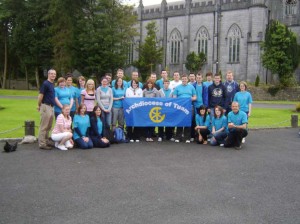 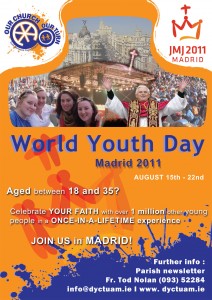 A group of thirty pilgrims from the diocese of Tuam got a new insight into what pilgrimage is about last Saturday night at the Cuattro Vincento airfield just south of Madrid.  The airfield was the venue for the Papal vigil and mass which was attended by close to two million people.  News of the thunderstorm which struck the venue was broadcast throughout the world but a lesser known difficulty for the pilgrims was the large population of ants who have the airfield as their home and who made life uncomfortable for the pilgrims who slept in the open air last Saturday night.  “This was really a pilgrimage and no picnic” said Amy King, a second year student at Mary Immaculate College in Limerick and a member of the Tuam Group who made it to Madrid.  The high temperature and not ants was the major difficulty for a St. Colman’s student, Aidrian Larkin.  “We climbed the reek, walked the Tochar Phádraig and the famine road in Leenane as part of our preparation for World Youth Day but nothing could have prepared us for the high temperatures here in Madrid” said the student from Mossbrook, Claremorris.

The thirty-strong group began their pilgrimage with a mass in the Cathedral in Tuam on Monday August 15th.  Stephen Bushell, a graduate in Architecture from Abbeyknockmoy, spoke to the congregation in the Cathedral about what World Youth Day is and he invited people to keep the group in their prayers over the course of their pilgrimage.  Each of the pilgrims was given a St. Christopher as they received a blessing and began the journey to Madrid.  The Tuam Group were guests of the Santa Cristina Community, a parish located close to the centre of Madrid.  Parishioners at Santa Cristina made the Tuam Group very welcome and tried to make the classrooms in the parish school which was home for the pilgrims as comfortable as possible.

The straitened economic situation in Spain, not unlike Ireland, meant that the hosting of World Youth Day 2011 did not receive universal welcome in Spain.  News of the protests and riots in Madrid during World Youth Day were broadcast on international media but protesters and pilgrims were kept apart by the city’s police.  “YOUR POPE-MY TAXES” was written on one of the placards of one of the protesters.  However, even those opposed to the hosting of the World Youth Day 2011 were surprised by the sheer volume of pilgrims who came for the Papal Mass on the final day with some sources estimating close to two million pilgrims in the vicinity of the airfield.

The energy, music, colour, dance came as a surprise to members of the Tuam group who had expected a pilgrimage to be a more solemn event.  “It was an inspiring event leaving me amazed and with a new outlook on the Catholic Church. I would recommend it to all” said Enda Greaney from Annaghdown Parish who is a student at Sligo IT.  For Kilian O Neill from Abbeyknockmoy Parish World Youth Day “was a completely different experience of Church it was truly inspirational.”  The week was eventful in more ways than one for Kilian because along with three other members of the group he received his Leaving Cert Results while in Madrid.  But it wasn’t just the events organised in Madrid that impressed Nicola Flaherty from Killererin.  Nicola who works as part of the Youth Ministry Team in Knock was taken by the “conversations that took place among the Irish Pilgrims in Madrid.  WYD gave an opening to speak about faith and church in a way we would never do at home and maybe we can learn from this experience.”

The Tuam group joined other English speaking pilgrims for Catechesis each morning.  On Tuesday morning the venue was the Madrid Arena, more famous for tennis matches than catechesis, where Archbishop Chaput was the main speaker.  After his input the young people were invited to address questions to the new Archbishop of Philadelphia.

On Saturday morning the Irish Pilgrims at Santa Cristina Parish joined the parishioners and volunteers for a mass celebrated part English, part Spanish.  The Tuam Group conveyed their appreciation to their host parish and Caroline Cullen, representing Athenry Parish presented the Parish Priest of Santa Cristina, Fr. Juan Ignacio with a copy of Kieran Waldron’s book The Archdiocese of Tuam; an Illustrated History on behalf of the pilgrims from Tuam.  Those attending the mass were treated to a beautiful rendition of Lady of Knock by the Quinn sisters, Ciara and Fiona, along with Yvonne McHugh and Orla Walsh all from Tuam parish.

Pope Benedict announced at the end of the Papal mass that the World Youth Day 2013 will take place in Rio de Janeiro, Brazil.  There was mixed views among the Tuam group on the way home as to whether they would brave another World Youth Day Vigil following their experience in Madrid.  One of the questions being asked was “do they have ants in Brazil?”