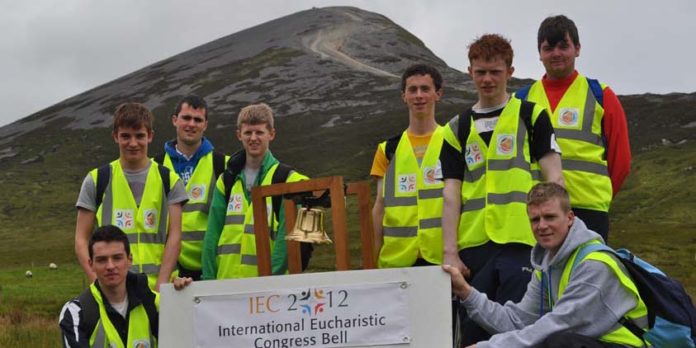 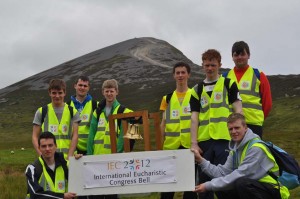 A unique aspect of last Sunday’s Pilgrimage to Croagh Patrick was the presence at the summit of the International Eucharistic Congress Bell.  A group of eight students from St. Gerald’s College Castlebar brought the bell to the top of the 764 metre high mountain on Friday July 29th, known locally as Garland Friday, in time for the annual pilgrimage which attracted an estimated 20,000 pilgrims.

“Weather conditions were ideal and we got the bell up the mountain in just over two hours” said Ronal Ludden, a member of the eight-strong team. “We were really surprised by the support and encouragement of people along the route as people enquired about the significance of this bell.”  John Cummins is curator of the church at the top of Ireland’s Holy Mountain.  John and his team built a special stand adjacent to the oratory for the Congress Bell which was rung at the start of each of the eight masses celebrated at the summit.

The Congress Bell was blessed in Dublin last St. Patrick’s day and is currently visiting parishes and communities all over Ireland in preparation for next year’s International Eucharistic Congress.  A bell was chosen as a symbol of this Congress because it links us with the origins of the faith in Ireland and to St. Patrick who used a bell to call the people to conversion and faith.  Similarly the Congress bell is a call to conversion and to be part of the preparations for next year’s Congress.

“We were delighted to be asked to bring the bell to the top of Croagh Patrick” said Nathan O Malley, another member of the group.  “We are all involved in the John Paul II awards programme and this fits right in with the aims of the programme which encourages people of our age to become involved in their local communities and parishes.”

Weather conditions were not as good on Sunday evening when the students took the bell safely to the base of the mountain where it was picked up by I.E.C. personnel to continue its journey around Ireland in preparation for Congress.  [End]