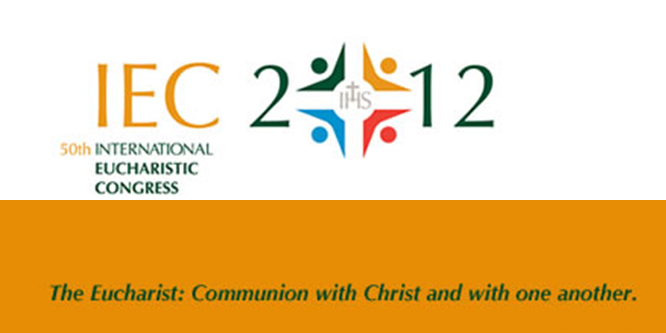 The visit of the  Bell was a great blessing for the Archdiocese.  It went to Galway diocese on July 4th.

The Eucharistic Congress Bell Pilgrimage began in the Archdiocese of Dublin in March 2011, and will end in a final pilgrimage ceremony at the opening of the International Eucharistic Congress at the R.D.S. in June 2012. During the year the Bell and the accompanying Icons will have traversed the island of Ireland and have visited each diocese in turn. The Bell was in the Tuam diocese from the 20th June until July 3rd, 2011. It visited as many parishes in the diocese as possible with overnight stays in the following churches: Westport – June 20th, Castlebar – June 21st, Ballintubber – June 22nd, Barnacarroll – June 24th. Knock for start of National Eucharistic Congress & Youth Festival – June 25th, Tuam Cathedral – June 26th, Dunmore – June 27th, Athenry – June 28th, Séipéil Cill Ronán, Arainn – June 29th (Lá Peadar ‘s Pól) Clifden – June 30th, Ballinrobe  – July 1st, Ballyhaunis – July 2nd, Tuam Cathedral  – July 3rd. The bell will then continue its pilgrimage to the Galway diocese.

The Eucharistic Congress Bell will be brought to the summit of Croagh Patrick for the annual pilgrimage on the last Sunday of July.

The pilgrimage of the bell throughout the Dioceses of Ireland is an invitation to people to deepen their communion with Christ and with one another and is part of the pastoral preparation for the International Eucharistic Congress in June 2012.  Various ceremonies and liturgies will be organized in the communities which will receive the bell.  All are welcome to join in these activities which will be advertised locally.

For more information on the route of the Congress bell visit www.iec2012.ie

For full schedule of locations for the bell – see below: