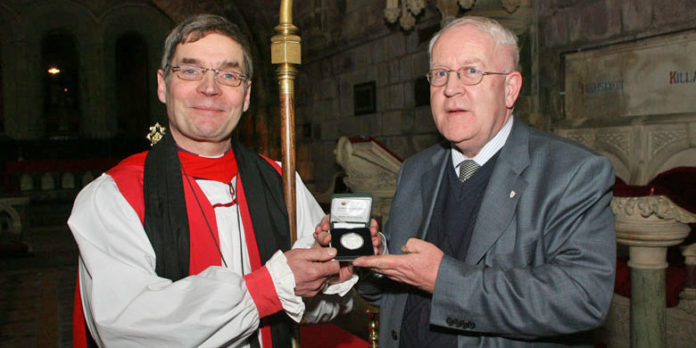 Bishop Richard Henderson, Church of Ireland Bishop of Tuam, Killala & Achonry recently announced that he was retiring and returning to minister in Carlisle in England. On Sunday last, January 2nd, he officiated at the annual Carol Service in St Mary’s Cathedral here in Tuam. It was his last official engagement here in his cathedral in Tuam. At the cup of tea afterwards Archbishop Michael Neary paid tribute to Bishop Richard with whom he had enjoyed very cordial relations over the past 13 years. Archbishop Neary recalled being present at his installation in 1997 and referred to Bishop Richard’s ecumenical spirit. He also said that during his time in the west Bishop Henderson combined great intellectual ability with a warm pastoral approach. He wished him, his wife Anita and their two daughters every blessing in the years ahead.

In the pictures Jarlath Canney who looks after Sr. Mary’s Cathedral makes a presentation to Bishop Henderson. Archbishop Micahel Neary and Dean Alister Grimason are in the pictures also.