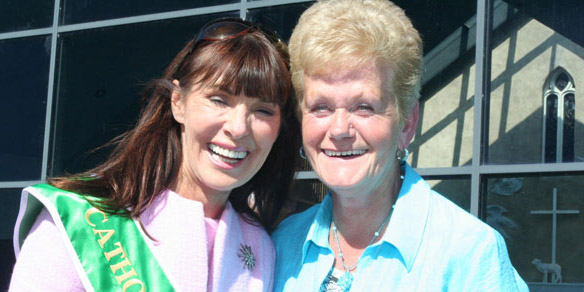 The Papal Blessing has been greeted by Co. Mayo woman Catherine Wiley, the founder of the Catholic Grandparents Association and the National Grandparents Pilgrimage.

The text of the blessing was recently received at the offices of the Association in Westport, Co. Mayo, and reads as follows:

“Our Holy Father Pope Benedict XVI invokes God’s Blessings of Joy and Peace upon you and all of the Association.

“Make them teachers of wisdom and courage, that they may pass on to future generations the fruits of their mature human and spiritual experience.”

Said Mrs Wiley: “This is a huge honour for our Association, and once again illustrates that the Church is open to the infinite good that grandparents can do.”

She added: “Grandparents play a huge role in transmitting the faith in families, and in just a few years, Irish grandparents have shown the power of coming together to pray and to celebrate.”

Chief celebrant will be Bishop John McAreavey, Bishop of Dromore, and the keynote speaker will be Breda O’Brien, the well-known Irish Times columnist and teacher.

Tyrone girl Chloe Coyle, a popular winner of this year’s Ireland’s Got Talent tv show, has agreed to sing at the Mass, while former Eurovision winner Dana, her mentor on the tv programme, will also perform. Michael English, a Kildare singer who has a huge following around Ireland, will also sing for what is expected to be a packed Basilica at Knock Shrine.

Further details are available on www.CatholicGrandparentsAssociation.com.

About the National Grandparents Pilgrimage

Further information on the National Grandparents Pilgrimage is available on www.CatholicGrandparentsAssociation.com

© Archdiocese of Tuam - Hosted by GetOnline and sponsored by Aid to the Church in Need
We use cookies to ensure that we give you the best experience on our website. If you continue to use this site we will assume that you are happy with it.Ok